#AceFoodReport – Nov.27: The TV chef Gary Rhodes, famous for shows such as MasterChef and Hell’s Kitchen, has died suddenly at the age of 59: Rhodes had been in Dubai with his wife, Jennie, who was at his bedside when he died. A production company that was working with Rhodes on a new TV series said he was taken ill during a break in filming.

Rock Oyster Media and Goldfinch TV said in a statement: “It is with terrible sadness that we share the news that Gary Rhodes OBE, TV chef, author and restaurateur has died suddenly at the age of 59.Gary was in the middle of filming a wonderful new series with Rock Oyster Media for ITV from his base in Dubai.

“All at Rock Oyster Media and Goldfinch are devastated by this tragic news. Gary was taken ill very suddenly at home during a break in filming and died a short time afterwards. Production was obviously halted as soon as Gary was taken ill and members of the Rock Oyster Team remain in Dubai to support the family as best they can.”

A statement released by the family read:“The Rhodes family are deeply saddened to announce the passing of beloved husband, father and brother, Gary Rhodes OBE. Gary passed away last evening at the age of 59, with his beloved wife, Jennie, by his side.”

Grosvenor House Dubai and Le Royal Meridien Beach Resort and Spa, where Rhodes worked, said in a statement: “The team … are devastated to hear of the tragic passing of chef Gary Rhodes OBE. Not only has the industry lost a true culinary legend, we have also lost an inspirational human being and a very dear friend. 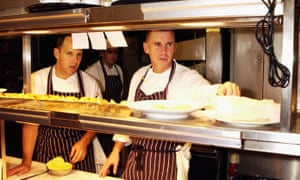 Rhodes in the kitchen in 2003. Photograph: Dave Benett/Getty Images

“No words can express our sadness at Gary’s death or our gratitude for the opportunity to work with him. Our thoughts and prayers are with the Rhodes family.”

Rhodes was born in London but grew up in Kent before embarking on his career as a cook, training at a college in Thanet: He became head chef at the Castle hotel in Taunton, where he retained its Michelin star at the age of 26………………..He came back to London in 1990, according to reports in the Caterer magazine, to become head chef at Greenhouse in Mayfair. He went on to launch several restaurants, including Rhodes & Co, and opened his first overseas venture in 2004.

Rhodes was awarded an OBE in 2006: He presented TV shows including MasterChef, MasterChef USA and his own series, Rhodes Around Britain. He also had four restaurants and his own line of cookware and bread mixes. He went on to feature in the ITV1 programme Saturday Cooks, as well as the UKTV Food show Local Food Hero. He moved to Dubai in 2011.

Tributes to the chef came in on social media, with many who work in the food industry sharing their condolences:Gordon Ramsay tweeted: “We lost a fantastic chef today in Gary Rhodes. He was a chef who put British cuisine on the map. Sending all the love and prayers to your wife and kids. You’ll be missed Gx.”

His fellow TV chef Ainsley Harriott tweeted:“So sad to hear the news about Gary Rhodes. A true culinary icon and a lovely man. Sending my love and thoughts to his wife Jennie and their boys. RIP, my friend. xx”

The chef Daniel Clifford, best known for his work at the Michelin-starred restaurant Midsummer House, said in a tweet: “Rest in peace a true British classic Gary Rhodes you opened the door for so many young English cooks.”

Shelina Permalloo, winner of the 2012 series of MasterChef in the UK, said Rhodes was a “pioneer of his time”.

The novelist Sharon Kendrick also offered her condolences, and said: “I once ate a bowl of pea soup, accompanied by a miniature bacon sarnie at his restaurant. It was sublime and I have never forgotten it.”

Editor says #AceNewsDesk reports are provided by Sterling Publishing & Media News here: https://t.me/SterlingPublishingPanel and all our posts, links can be found at here Live Feeds https://acenewsroom.wordpress.com/ and thanks for following as always appreciate every like, reblog or retweet and free help and guidance tips on your PC software or need help & guidance from our experts AcePCHelp.WordPress.Com or you can follow our breaking news posts as a member on Telegram https://t.me/acebreakingnews