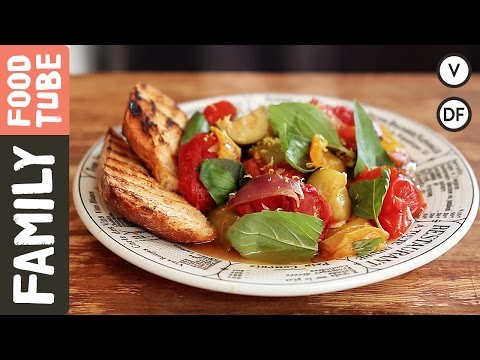 #AceFoodNews – Sept.30: Getting veg in to your kids is a common battle for parents but with my colourful and easy ratatouille recipe it’s a battle that can be won! Nice bite sized pieces of courgette, aubergine, peppers and tomatoes are slowly cooked with a dash of balsamic and garlic until you have a stew that’s sweet and silky and totally delicious!

Our daily newspaper is here :

#AceFoodNews – Sept.29: Nearly 24 million Americans live in food deserts and don’t have access to affordable, quality, fresh fruits and vegetables. For the third year, fresh juice brand Naked Juice, a division ofPepsiCo, is partnering with Wholesome Wave — an organization that helps create affordable access to fresh, local and regional food to those in need — […]

#AceFoodNews- Sept.29: When you bite into a hamburger or slice into some salmon, do you think about the impact it had on the environment on its way to you? http://www.businessinsider.com/the-top-10-foods-with-the-biggest-environmental-footprint-2015-9?utm_source=googleplaynewsstand&utm_medium=referral

There’s a finally a bit of good news for North Sea cod.

#AceFoodNews – Sept.25: Conservationists have taken North Sea cod off a red list of ‘fish to avoid’ eating, after fish numbers started to show signs of recovery.

North Sea cod fishing collapsed in the 1980s as a result of decades of overfishing and efforts to avoid catching the species when netting other fish.

But today the Marine Conservation Society (MCS) said they had revised their assessment of the fish and raised it to an ‘amber’ level four rating.

This means the fish can be eaten very occasionally rather than avoiding it all together.

It’s fantastic to see this fishery finally off the red list. Years of sacrifice and a lot of hard work have led to population increases above dangerously low levels.

Whilst this is certainly is a milestone for North Sea cod, the job is not done yet. Efforts of recent years need to continue in order of for the fishery to head towards the green end of the spectrum.

He said cod numbers needed to rise and catches should be further reduced down to levels where they are being fished without depleting the population, with all cod stocks in the UK still being fished above that level.

Cod may never return to its pre-collapse glory days but the numbers are certainly improving.

#AceFoodNews – Sept.24: A lot of people don’t realise they’re in danger of catching deadly bacteria from the outside of supermarket chicken packaging, a new report says.

Almost three quarters (70%) of Brits did not know exteriors could contain the killer bug Campylobacter, according to a study from antibacterial technology firm Biomaster.

Despite the bacteria being present in almost three-quarters of all supermarket chicken sold, half of us also thought it was safe to pack a tray of chicken in a mixed shopping bag, the research added.

And the same amount didn’t wash their hands after handling the packaging, which was recommended to prevent contamination.

The Food Standard Agency (FSA) confirmed in May 7% of chicken containers had tested positive for the bacteria after running a 12 month testing programme.

The study involved the leading supermarkets and a sample of butchers.

‘The aim of our new survey is to keep the pressure on retailers to work with processors to bring campylobacter levels down by introducing controls suitable for whatever their production processes,’ said a FSA spokesman.

‘We will continue to sample organic and free-range chickens.’

#AceFoodNews – Sept.21: Apples account for 18.9% of fruit intake among people ages 2 to 19 in the United States, according to the study published Monday in Pediatrics (CNN) reported today.

Tamal was named Star Baker after a storming week on Great British Bake Off (Picture: BBC)

#AceFoodNews – Sept.16: Tamal Ray was finally, FINALLY crowned Star Baker of Great British Bake Off and everyone was over the moon.

Game pie and fruit cake were the order the day, and one person in the Bake Off tent totally outshone all the others.

This week was definitely Tamal’s week.

#AceFoodNews – Sept.15: The so-called Coco No Loco is made with tasty Diplomatico Blanco rum, coconut water and a hint of mint – and it’s got just 141 cals (Picture: Diplomatico Rum)

We’re so over the skinny bitch. Aka vodka soda lime, it’s the epitome of dull drinks.

It’s the drink you order if you’ve just said: ‘Oh I’m only staying for one! Got a spin class in the morning!’

And it often doesn’t even taste that good.

At least it doesn’t when it’s made with flat soda and a rock-hard lime quarter, or worse, cordial.